I was a child of the sixties, and as a teenager I liked to listen to the ballads

of Judi Collins. .Her songs made motherhood sound like a noble calling.

” had I a golden thread and a needle so fine,

I would weave a magic strand of rainbow design,

in it I would weave the courage of a woman giving birth,

I  had no concept at that time of the courage of motherhood. I married in my early twenties, and we were soon expecting  our first baby. When my first child was born I discovered that courage and self-sacrifice were born with the baby. Motherhood was a romantic notion until I was expecting my own child. The   carrying of a child in my womb and the labour of  giving birth, some how empowered me with determination to defend and nurture this new life. The hard work of the birthing process developed in me an endurance to give myself to nurture the life of our new baby. I have now had the experience of waiting for a grand child’s arrival, being along side as another mother laboured. I have watched as courage was born  in a mother through giving birth to her child.” The fruit of the womb is a reward ” Psalm 127 v 3.

‘ A Child is Born‘ Mixed Media Print of Steph and Elijah 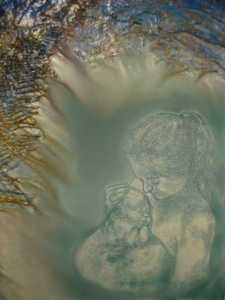